Mr. and Mrs. Sardinian warbler and their offspring!
... or show that you never know!
March 1 2010


As we had yesterday been observing the black kites on a country road along the garbage dump of Los Barrios, we suddenly did not trust our own eyes. A cow shepherd lured all bulls, which had been on a field, with food onto the way. Surely the herd was supposed to change the field. But was it necessary in our direction? 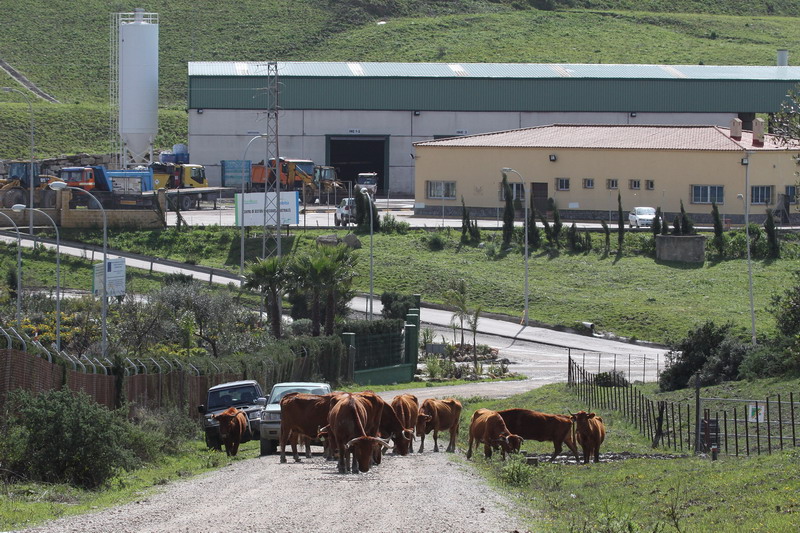 This biker with his orange colored jersey gathered all his courage. On the photo you cannot hear his "hohoooo - calls" with which he wanted to frighten the bulls. But they didn´t care about the orange color but rather the food. 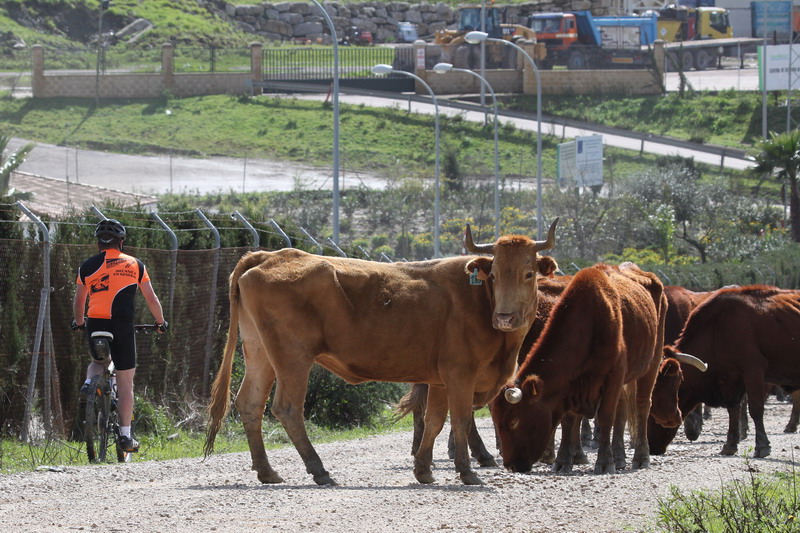 So, behind us the bulls and in front of us this way, - half washed away. We decided for the way! 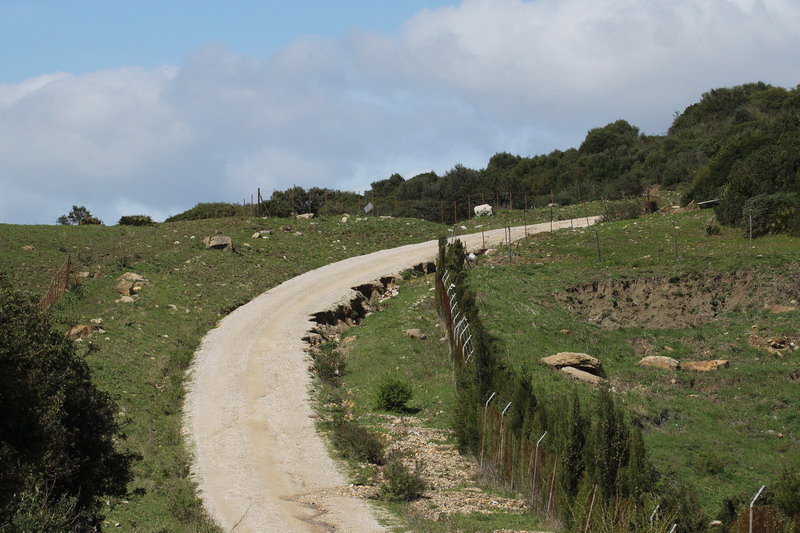 And this turned out to be a good decision, because suddenly we saw this Sardinian warbler. First I thought a female: 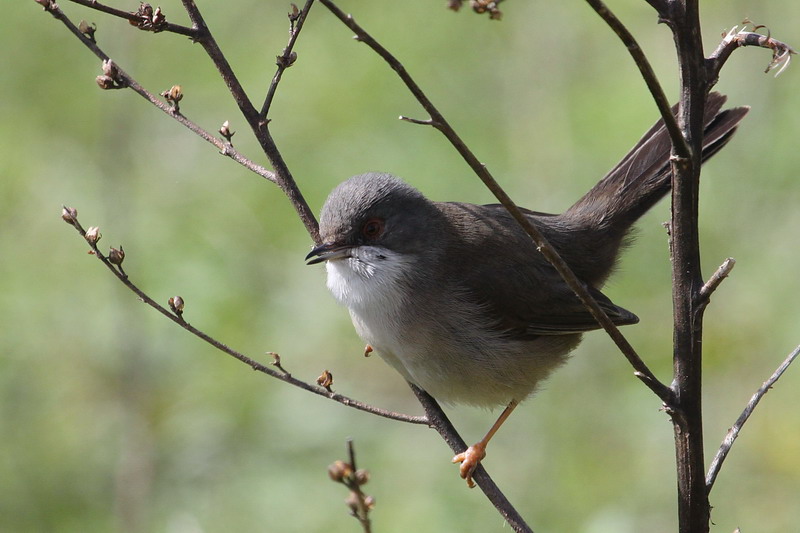 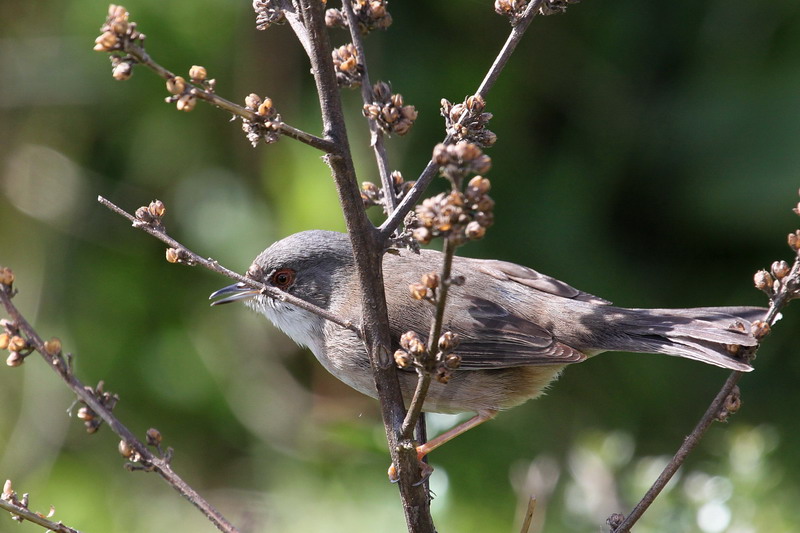 Not far from we discovered the male, which 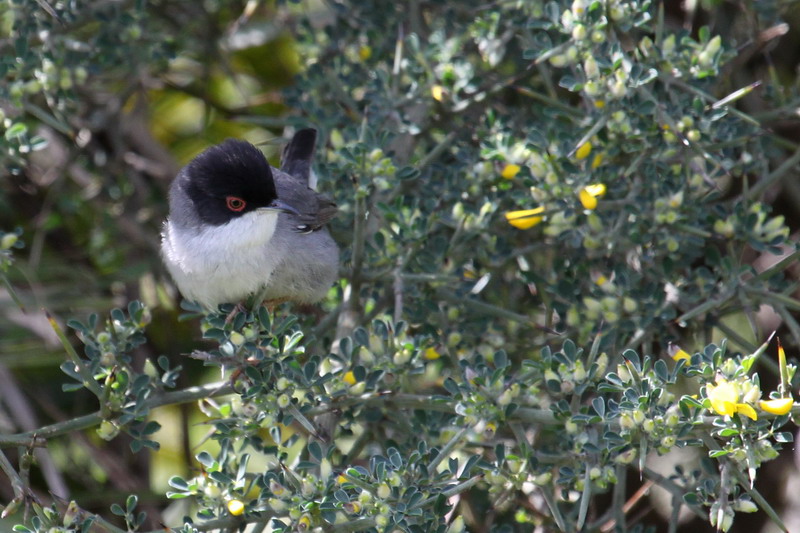 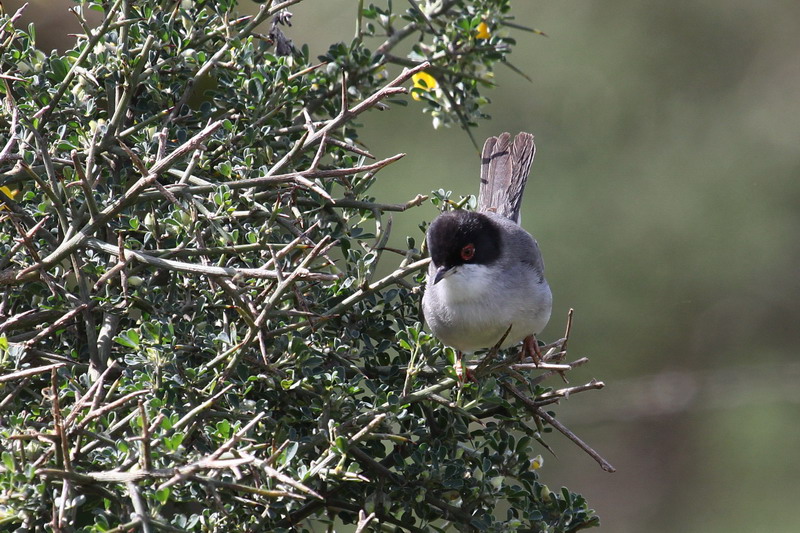 looking for food, while the tschaktschak became more and more loud and impatient. It was only when I saw further two alleged females flying 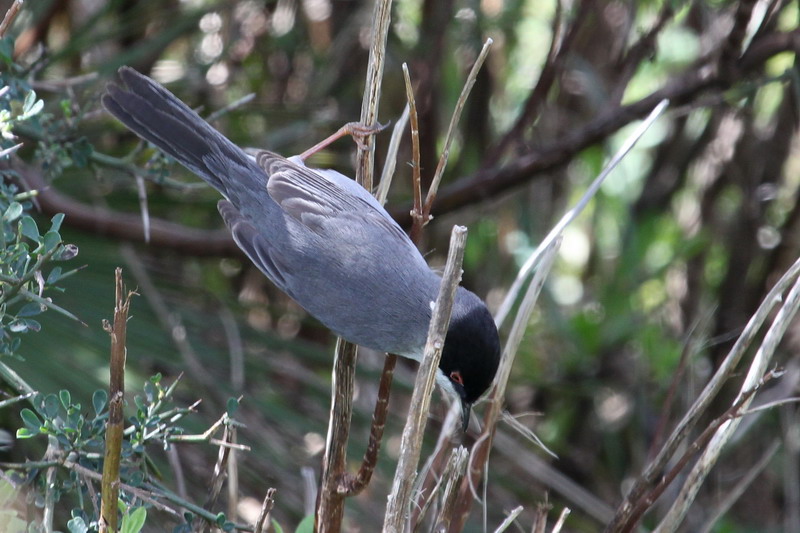 I finally understood the scene! Family Sardinian warbler already had to take care of their offspring! Above left a young bird, in the back the proud and a little frustrated father: 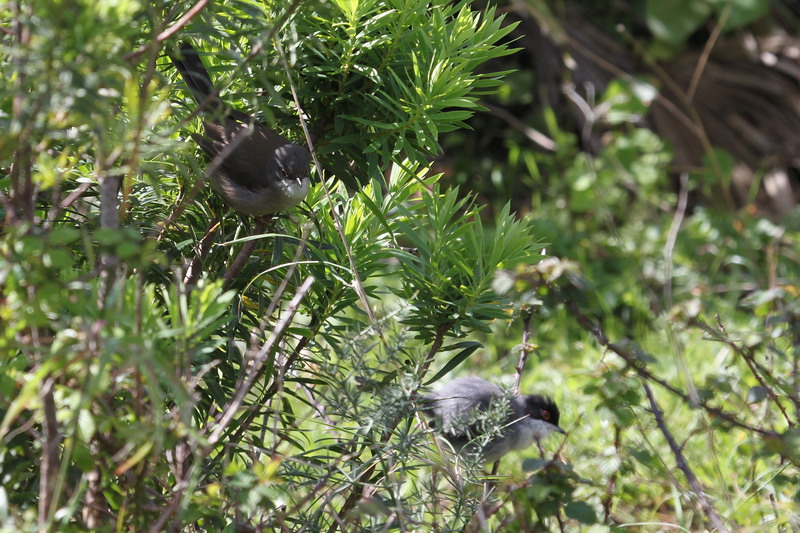 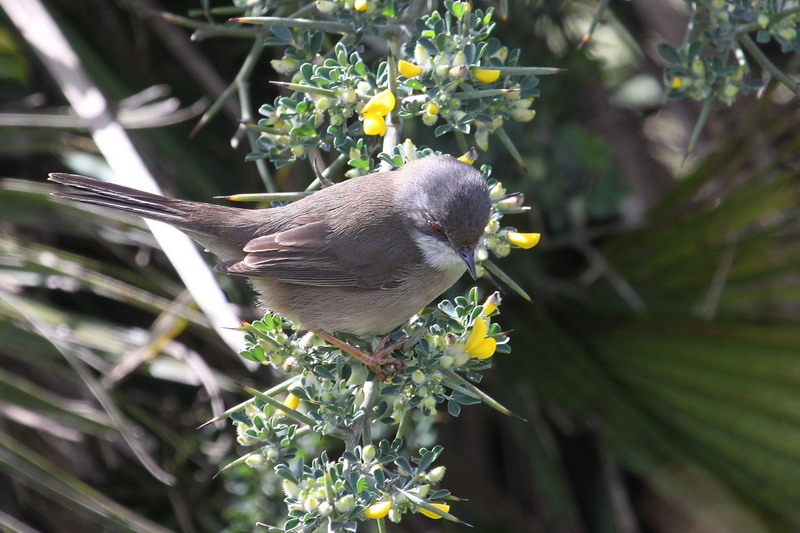 was begging excitedly with its wings and voice for food: 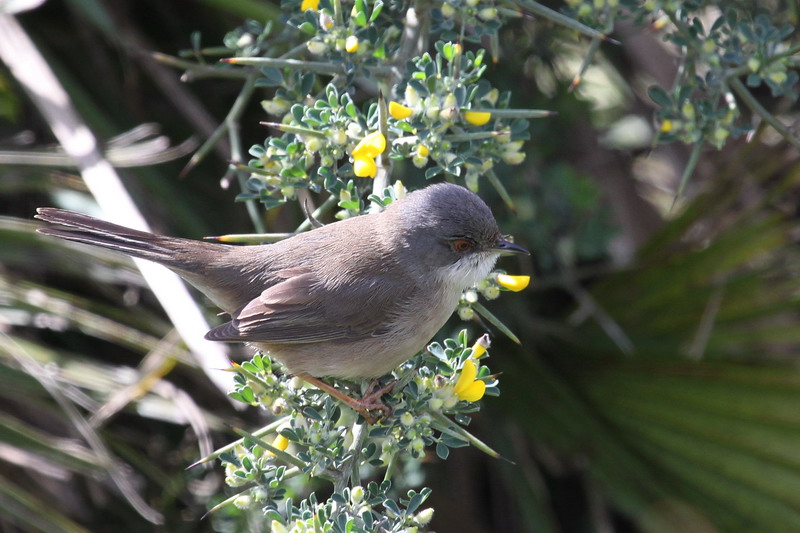 "Where does Daddy stay so long???" 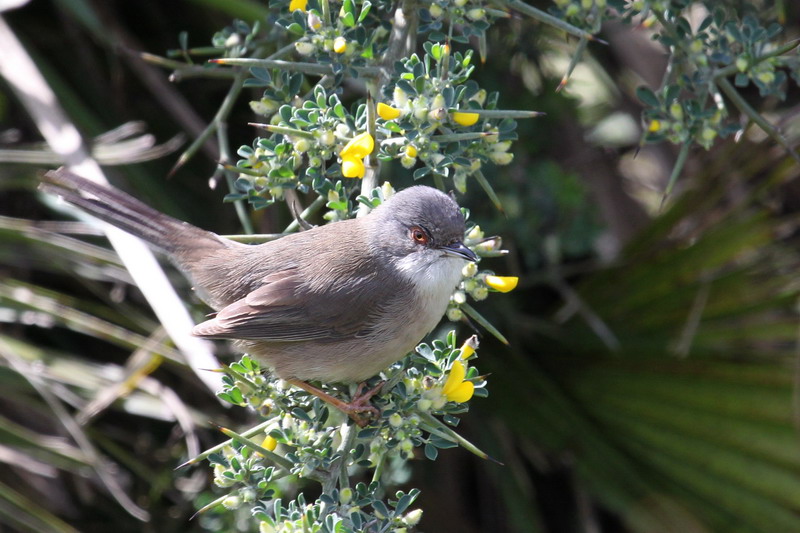 But Daddy first had to take a break: 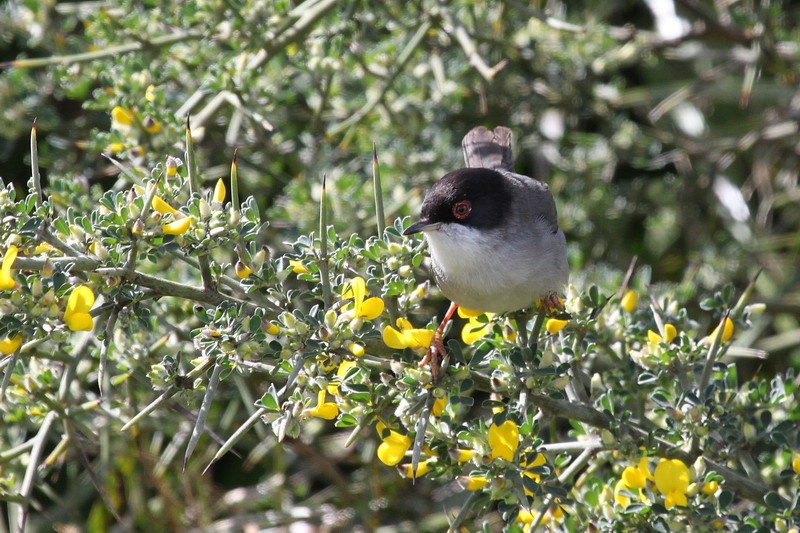 Unfortunately in that moment a car came driven down the bumpy way and we had to move, but still saw how the whole family flew to a bush farer away.

So sweet, this family! I never would have thought it possible, that these shy and hidden birds would give us such a nice insight in their family life. A truly nice experience! And that they have offspring that early also surprised us very much.

And rightly, because now I have to change the story.

After I showed the photos to an English bird expert, he knew immediately what I really had seen: adult females begging for food with the same gestures like the young birds are doing. As A. told me this belongs for many birds species to a wedding performance, also for the Sardinian warblers. Again I learned something new! And to have seen it, makes me most happy, also when I interpreted everything wrong!